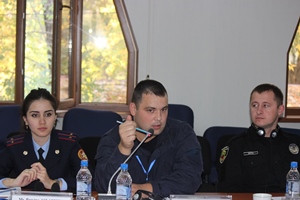 The event, held at the OSCE Border Management Staff College, focused on the effectiveness of current strategies to prevent recruitment and impede the flow of foreign terrorist fighters to conflict areas. Participants explored how to counter terrorist propaganda among young people and other vulnerable groups, the challenges in identifying individuals who support terrorism, as well as in detecting foreign terrorist fighters who are returning and might commit an act of terrorism within the OSCE area.

“Participants of the roundtable discussion shared their understanding of the context and discussed further ways to expand co-operation and co-ordination with the aim of addressing the existing and emerging counter-terrorism challenges and perspectives,” said Dita Nowicka, Director of the OSCE Border Management Staff College.

Keynote speaker Dr. Sajjan Gohel, International Security Director at the Asia-Pacific Foundation, noted that the goal of terrorists is to inflict damage that has economic, political and social consequences. “There is a need to develop better resilience. The international community faces a common threat and it is important to engage in finding common solutions,” Gohel said.

Contributing to the panel discussions were Dr. Shahrbanou Tadjbakhsh, the Head of the Specialization on Human Security at the Masters of Public Affairs (MPA) at the Institute of Political Studies (Sciences Po) in Paris and a Research Associate with the Peace Research Institute Oslo (PRIO); Dr. Ivan Safranchuk, Associate Professor of the Moscow State Institute of International Relations and Member of the Council on Foreign and Defense Policy, and Anna Gussarova, the Senior Research Analyst at the Kazakhstan Institute for Strategic Studies.

In the course of the event, participants of the OSCE-supported training course on the identification of foreign terrorist fighters, which is run by the Border Security and Management Unit of the OSCE Secretariat’s Transnational Threats Department, also shared the results of their reports on the matter.