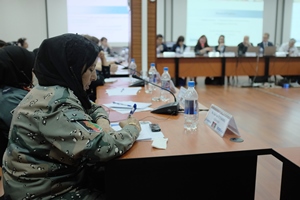 Afghan female border officials participating in an OSCE Border Management Staff College’s roundtable discussion on the situation in and around Afghanistan, 16 May 2016. (OSCE BMSC/Ilona Kazaryan)

The course provided insight into human rights issues in border security and management, including gender equality principles, national commitments on promoting women’s rights, trafficking in human beings and drugs, anti-corruption and investigation techniques, leadership and management as well as first aid skills. The sessions were delivered by experts from Canada, Moldova, Tajikistan, the United Kingdom and the National Assembly of Afghanistan.

“By ensuring greater inclusiveness of female border officials in securing borders we bring in the perspectives of all parts of our societies,” said Dita Nowicka, Director of the OSCE Border Management Staff College. “In spite of many existing and emerging challenges, women in Afghanistan do join the border force. They are a minority but of those that I met, they are willing to further develop and contribute to the improvement of their country’s border security and management system. With this in mind we are privileged to deliver this course in close co-operation with the European Union-funded Border Management in Northern Afghanistan project (BOMNAF), which is being implemented by the UN Development Programme.”

William Lawrence, Manager of UNDP’s EU-BOMNAF and JICA Border Management Projects said: “Forming approximately one percent of the force, women officers in Afghanistan’s Border Police are in a very small minority and work in an often challenging environment. The women on this course have benefited greatly from the opportunity to share experiences with officers from another country’s border forces and together learn new skills, and we have thoroughly enjoyed having them here.”

On 16 May 2016, the participants of the Border Management Awareness Course had an opportunity to contribute to a roundtable discussion on the situation in and around Afghanistan. Together with experts, representatives of the government agencies, diplomatic missions, international organizations, and participants of the Border Management Staff Course for Women Leaders, the female officers from Afghanistan exchanged ideas and experiences concerning recent developments in and around Afghanistan, ways to prevent the security threats and the influence of these threats on regional security.